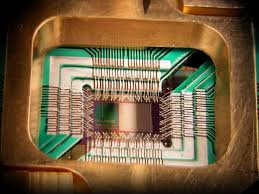 A conventional computer makes use of binary language (made up of zeros and ones) to store the information or data in the form of bits, but quantum computers makes use of qubits which is also made up of zeros and ones and a combination of both known as superposition. Where three bits can represent any one of eight values and three qubits can represent all of eight values at a single time. The advantage of using qubits is that particles can exist in several stages at the same time which allows the quantum computers to run faster than conventional computers.

The director of Google Hartmut Neven reveals that they found problem instances involving 1000 binary variables. Where quantum annealing outperform its classical counterpart, simulated annealing which is more faster i.e.(10 to the power of 8 times) than simulated annealing which is running on a one single core. They also compared the D-Wave 2X quantum computer hardware with another algorithm called Quantum Monte Carlo, which is nothing but a method especially designed to study the performance and behavior of the quantum systems. The main problem with this is it runs on conventional processors and the scaling with size between these two methods is comparable.

Quantum computers offer a better way to cheat on problem solving duties whereas conventional computers are very poor at it. Instead of scanning the entire surface for the lowest point quantum computing simply allows the user to peep through a funnel. As the results are very interesting Google decided to run ahead to bring the quantum enhanced optimization into practical technology and it put some hardware team at the quantum AL lab to build more number of quantum processors and also semiconductor electronics.